“They were paid well. They were rewarded handsomely. And yet they stole.”
Dr. Dominick Lembo

Office manager Arlene Marchese and dental hygienist Karen Wright had worked for Dominick Lembo, DMD, at his Belmont Dental Associates office in Haledon for more than a decade, according to a northjersey.com story.

They have admitted diverting insurance payments from Dr. Lembo for six years, from 2005 to 2011.

The women admitted diverting insurance company reimbursements for treatments at the dental office.

They had been authorized to receive the checks and deposit them in the dentist’s business account but instead deposited the money in another account that they used.

They were charged in 2012 after Dr. Lembo called an insurance company asking about payments he should have received.

The women agreed to make restitution of $200,000 and will receive probation when they are sentenced May 2.

Dr. Lembo said he was in “complete and total shock” when he found out that two trusted, longtime employees were taking money from him, despite being well-paid.

Here some news clips you can view, just click  the image. 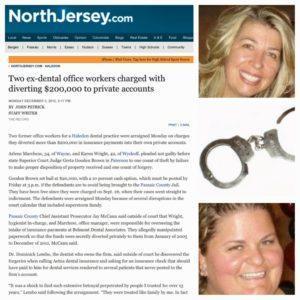 Ordered to $200K in restitution 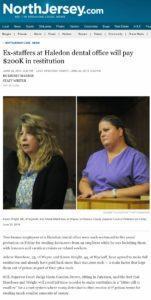 Ordered to pay 200K in restitution

Karma has no deadline! 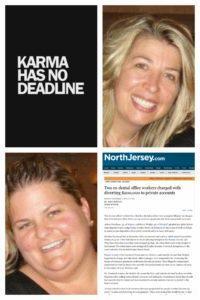 Karma has no deadline – bitches!