Tina Palko accused of stealing over $80,000 from doctor’s office


Too many doctors are ripped off by employees stealing checks.

“This case involved theft of checks from the doctors bank account. Tina Palko was able to create checks and forge the doctor’s signature.  Doctors, DO NOT allow your employees to access your checkbook, or put controls in place to monitor and oversee the process of paying vendors.  Busy doctor + trust + blind-spot = opportunity to steal.”

Aug 2017 – UNIONTOWN, PA. – A Fayette County woman is facing charges for allegedly stealing over $80,000 money from the doctor’s office where she worked.

According to court paperwork, Tina Palko was the office manager for a pediatrician’s office in Uniontown when police said she used the company’s bank card to buy groceries, candy and clothing totaling almost $2,500.

She is also accused of creating business checks from the bank account for vendors, then forging the doctor’s signature, totaling almost $79,000.

Employees told Channel 11 she worked there for 16 months.

She is out on bond and facing a long list of charges. 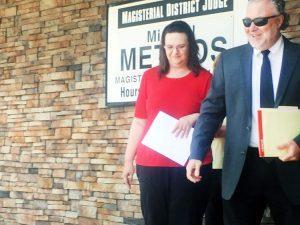 Tina Palko, 45, of Uniontown walks out of her preliminary arraignment with attorney Jack W. Connor on Friday. Palko was charged with stealing more than $80,000 from her former employer.