Woman gets 20 years for embezzling from Naples dental practice


April 14, 2008  A former Naples dental office manager who embezzled about $220,000 over nearly two years left her sentence in the hands of a judge.

Cassandra Jean Lorenzi, 38, of Fort Myers, rejected a plea bargain to a year in the county jail because she didn’t want to lose her new job. She had hoped she could serve probation and pay off restitution.

To test how intent Lorenzi was in paying her former employer, Aesthetic & Implant Dentistry of Naples, Collier Circuit Judge Fred Hardt gave her a chance, holding off sentencing for six months to see how much she’d pay.

That six-month deadline ended Monday, when Hardt learned she’d paid nothing until handing over a $6,000 check Thursday. The judge also learned the extent of her scheme may have been far more than her restitution amount and Lorenzi wasn’t taking responsibility, but was blaming her manic depression and her employer for manipulating her.

So Hardt sent Lorenzi to a state prison for 20 years; shocking everyone, even the prosecutor.

“It will put fear in the heart of people who are inclined to steal, especially the employees with a fiduciary duty to their employers,” said Assistant State Attorney Jerry Brock, who prosecutes crimes for the Economic Crimes Unit.

“Even after we interviewed her, she went down to the bank to try to take more money out. She was brazen.”

Dr. Dawn Marie Arena, who built the dental practice since 1997 with her then-husband, Dr. Marcelo Mattschei, was glad to see a resolution after two prior attempts at sentencings.

Arena said the home the Lorenzis purchased with the stolen money was sold, but the practice received nothing and has since folded, leaving six employees jobless, and she and her husband divorced.

“When tragedies come in, unfortunately bad things happen. I take this as a learning experience,” Arena said, declining to say where she’s working now.

Lorenzi’s attorney, Peter Aiken, declined comment, as did her mother.

Lorenzi pleaded no contest Oct. 22 to scheme to defraud involving $50,000 or more and turned down Brock’s plea offer for a year in jail. The first-degree felony is punishable by up to 30 years in a state prison, and the judge was told Lorenzi had no prior felonies. But Monday, Brock told the judge she had two prior felonies, including a gross cheat-fraud case in Indiana.

Lorenzi, who has been free on $50,000 bond, was arrested by Collier County Sheriff’s Office investigators Sept. 12, 2006, after Mattschei reported that she was stealing from his office and patients’ accounts. He said his wife received a phone call from Judy Cramer, a Household Bank representative, who was suspicious of an account Lorenzi maintained.

Cramer said the only transactions were credit deposits withdrawn from the practice’s SunTrust account. Cramer said she’d been calling for several months, but Lorenzi intercepted the calls, so she called Arena’s home.

Records say Lorenzi overcharged patients, creating two bills, a legitimate one and one patients weren’t aware of. The second acted as a customer credit and was deposited with Household Bank or Bank One. Cramer said she believed money also was transferred from a SunTrust account to the other accounts. At a prior hearing, Lorenzi told Hardt “all the doctors were doing it.”

When Cpl. Richard Stoneson interviewed Lorenzi on Feb. 18, 2004, she was carrying SunTrust statements, patient checks and other items belonging to the practice. The investigation showed she embezzled from Aug. 26, 2002, to March 1, 2004.

On Monday, Freeman told Hardt that Circuit Judge Cynthia Ellis will be signing a consent judgment against Lorenzi for $220,000. He said Lorenzi and her husband used the money to purchase a home and Lorenzi also stole patients’ identities through their credit card numbers and diverted about $350,000, including thousands of dollars belonging to a man in London.

Brock said investigators looked into the credit fraud but said the scheme was too confusing because Lorenzi took money out, returned it, took it out again months later, and returned it, back and forth. Brock said she also handed out discounts without the dentists’ knowledge if patients paid in cash.

Freeman said Lorenzi had an “obstructionist attitude” and refused to cooperate, causing the practice to spend more than $70,000 in legal fees fighting her. Arena urged the judge to impose the maximum, telling him, “During the course of the investigation, Ms. Lorenzi never cooperated or had remorse. The trust of our patient base was damaged.”

Aiken denied Freeman’s contentions that Lorenzi didn’t cooperate, saying she intended to hand over $2,500, but used it to hire an attorney. He said early on, she paid $20,000 and only agreed to pay $80,000 in restitution because others were involved.

“The last six months for her have been tough because she’s been through a divorce and a serious depression,” Aiken said.

Lorenzi blamed manic depression, saying she was diagnosed at age 21, and that she doesn’t handle money well, so she’d turn over her paycheck to her parents, who would be paying restitution and handling her finances. She contended she’d made “every effort” to pay restitution, including selling property for $25,000 and turning over that and an additional $7,500 before last week.

“It was not being able to handle my own finances that led to my problems,” Lorenzi told the judge, blaming Mattschei for giving her too much responsibility when she had no experience. “The checks did go into my account, but the checks going into my account at the start were at his hand. He created a system for not just me, but for others in the office.”

She told Hardt he manipulated her.

Although Arena sought the maximum, Brock asked only for a substantial term, while Aiken urged probation, or a lenient term of incarceration. But Hardt likened the case to that of Lorraine Afshari, who created a fake mortgage company, scammed dozens of investors out of $211,000, and then blamed friends for helping her start a business even though she was mentally ill. Last year, Hardt sent her to prison for 25 years.

“That was another case where the defendant is still in total denial, blaming other people,” Hardt said, adding, “It is the sentence of this court that you be committed to the Department of Corrections for 20 years.” 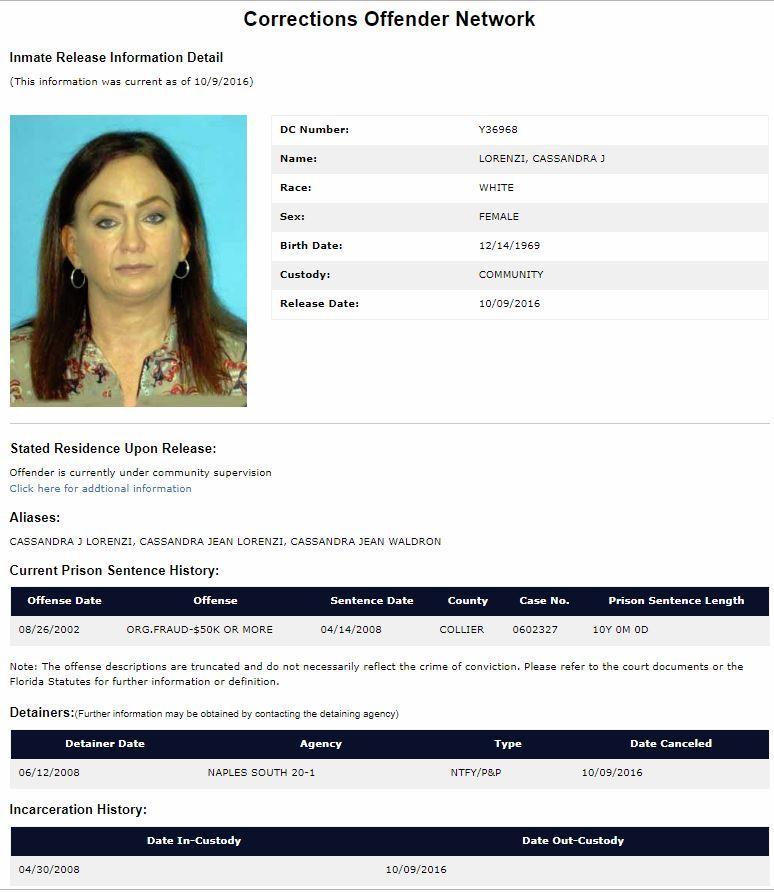 Previous Post
Corryville dental office was targeted by thieves twice. This time, the suspects were caught on video.
Next Post
Where are they now? Serial Dental Embezzler: Irina Chernyahkovsky / Karen Fooks